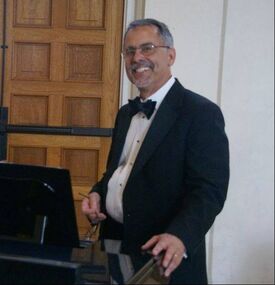 Michael Struck was born and raised in Marin County, graduating from Redwood High School.  He received his Bachelor of Music in piano at the Oberlin College Conservatory of Music and his Masters from Dominican College.

Since 1983 he has served as Choirmaster/Organist at St. Paul’s Episcopal Church, and is organist for St. Raphael’s Church and First Church of Christ Scientist in San Rafael.

As a choral accompanist he toured China and Italy playing in St. Peter’s Basilica.  For two years he was the conductor of the Winifred Baker Chamber Chorus and toured the UK with performances at St. Martin in the Field and Canterbury Cathedral.