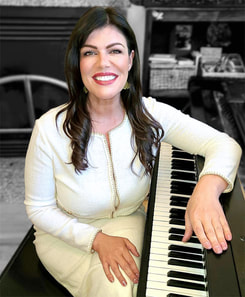 Daniella Caveney is a lyric soprano, pianist, music educator, and conductor who has enchanted audiences in Europe and America as a dynamic concert soloist as well as having performed operatic roles with such companies as San Francisco Lyric Opera, Tyrolean Opera, Berkeley Opera and Florence Opera.  She attended the San Francisco Conservatory of music as a vocal performance major for her undergraduate studies, and in 2004 ,launched her career in Opera and began teaching and directing ensembles.

​As a Director, Ms. Caveney engages ensembles, and audiences through a variety of platforms. She is the Founder and Executive Director of The Artists' Salon, which produces professional classical music variety shows, and can be found instructing choral masterclasses throughout the San Francisco bay area, leads songwriting workshops, and offers private vocal and piano lessons.

Inspired by challenging choral works and having sung in several choruses herself including the San Francisco Grammy Jazz Choir, and The Sound of America National Honor Choir, Ms. Caveney has founded and directed several small and large vocal ensembles, including an cappella ensemble, and an international chorus based in Florence, Italy sponsored by the Royal Corsini Family.

Ms. Caveney brings her passion for greatness to the Novato Music Association Chorus.  She leads from this core belief:
"In a chorus, the limitations of the individual voice is inconsequential. Music and the arts draw us to the heart.  From this space, united, we are capable of more."