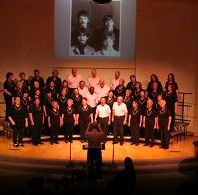 The Novato Music Association was founded in 1974 by a group of music lovers interested in bringing classical music to the Novato scene.  It started out with musicales being performed first in people's homes and then in church venues.
The first operetta "Die Fledermaus" a fully staged show with a 25 piece orchestra was produced in the Novato Community House in 1977.  Two years later, this performing arm of the NMA was named the North Bay Opera Ensemble.  Frequent musical theater continued.

In the early 1980's, in addition to the NBOE, the Novato Lyric Opera and the Marin Opera Company were presenting fully staged shows in the Novato Community House and the Showcase Theater in San Rafael. After several successful shows including the "Elixir of Love", the "Merry Widow", the "Student Prince" to name just a few, the NBOE turned its attention to the Gilbert and Sullivan Repertoire.  These operettas were critically acclaimed.

In 1987, the NBOE merged with the Novato Lyric Opera forming the NorthBay Lyric Opera. The Novato Music association returned to its Choral only productions in 1991.

Two members of the current chorus sang in the first production of "Die Fleidermaus" .

The Chorus became the performance group for NMA. Since that time, the Chorus has presented two main performances each year - a holiday concert, usually held the first weekend in December, featuring holiday music both sacred and contemporary - as well as a Spring Show, performed for two weekends, usually near the end of April. These are showcases for contemporary music of stage and screen, well-known composers and musical groups.

The Chorus, which has grown in recent years to a performing group of nearly 50 voices, is an opportunity for those who love to sing and to share their musical talent with their community. NMAChorus is equally civic-minded as well: The group entertains seniors at local convalescent hospitals and retirement communities, as well as participating in several Hamilton Hometown Festivals.